Few weeks ago, Blackmagic Design revealed the upcoming version of its correction and finishing software, DaVinci Resolve 10. Stuart Ashton, Director of BMD EMEA, was so kind as to answer some questions about Resolve 10. 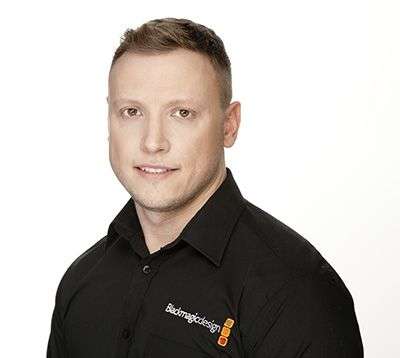 Since the acquisition of DaVinci by Blackmagic, Resolve’s growth has been spectacular in all markets. Did you expect that or has Apple Color disappearing has been a critical factor?
We are definitely seeing a lot more interest in general around the process of color correction and that has been a significant contributing factor to our growth. Major film releases including  Avatar, Skyfall, Star Trek Into Darkness, and more recently, World War Z, which portray the strength of color correction, have had a big influence on creatives and inspiring them to try color correction. The affordability of tools like DaVinci Resolve and Apple Color also means that the technology is much more accessible today than it has ever been before. Combine that with the falling cost of CPUs and storage and you can now color correct on machine that is far smaller and more affordable than ever before.
Which of Resolve 10’s new features are you most proud of?
Our intent for Resolve since we first acquired DaVinci was to create a more open postproduction workflow for creative professionals. We know through our experiences that the whole process is about having flexibility and speed in each of the areas that you want to work in. The ability to move between systems effortlessly is essential. At NAB this year we announced Resolve 10, which added a number of key features including Resolve Live, OpenFX support and an online editing tool.
Over the course of the last two years we have seen a growing requirement for onsite grading, with colorists becoming an integral part of the acquisition and production process in order to smooth through the production process before the content gets into post. Users can now take a live video feed into Resolve and grade, live.
Using an I/O device, onset colorists can view the feed coming of the camera directly in to Resolve’s grading window. The colorist can now work with the DOP, lighting director, and staging and makeup artist to ensure that every single part of the production process is working together to achieve the final look of the production before a single frame of content has been captured.

When we talk about openness its not just about the physical technology, it is about everyone understanding the value of each other’s roles in a production, including the color correction process. And understanding that everyone onset is an integral part of creating a finished look.

Resolve will support Open FX plug-ins. Will BMD develop some of them or is your idea only to support third parties’?
Having announced the addition of OpenFX support in version 10 of Resolve their are currently no plans for Blackmagic to develop its own pluggins. The great thing with OpenFX support is that hundreds of third party developers are already creating those pluggins, which users can buy off the shelf from or you can write themselves, and being able to work with those within Resolve will only enhance its capabilities.
Resolve 10’s editing module will bring all the required features for editing. Is your idea to reach Apple, Adobe, Avid or Autodesk’s level?
We believe that not one tool is capable of delivering everything.  You have to look at the way in which people work and you have to consider the tools that already exist. So for us it wasn’t a case of reinventing the wheel, or even trying to compete with existing NLE tools because they are already doing a great job. For us it is about making an extra connection with NLEs to find a final finishing point.
Consider a typical production today. It is fairly common to have multiple editors working on a single job. Some are using Avid, some might be on FCPX. They could be in different facilities and even perhaps in different countries. With video content coming in from one editor, VFX shots from another location, what was missing in Resolve was a way to accumulate all of that content, finish it and then master it out at full resolution in a single location.
Resolve’s new online editor lets you do multi track video and audio assembly in an environment that is familiar to editors and colorists. As part of the online process we’ve also added integration with easyDCP so users can now assemble RAW clips into a sequence and deliver a finished project without having to export your project to another application.

What is the integration with EasyDCP all about?
A/. The amazing thing for Resolve users is that you can now work entirely in RAW. You can bring RAW clips into Resolve, you can grade RAW clips, and then you can deliver as a digital cinema package (DCP), which means it can go straight to cinema.  There are already a number of 4K projectors and high end projectors out there that will receive DCP and so this means you’re not having to compromise on the quality of your footage through the entire color correction process. It also eliminates the need to take the footage outside of Resolve, to then do another conversion. It’s all now housed within the one package.
color grading davinci interview resolve
Share. Facebook Twitter Pinterest LinkedIn Tumblr Email